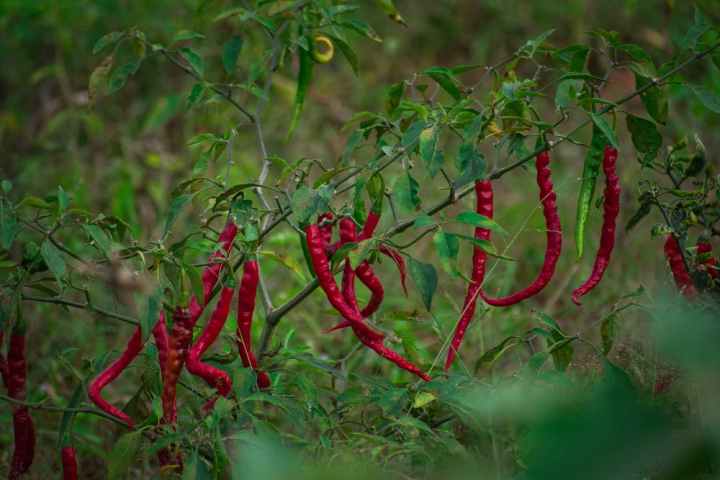 Spring is just around the corner and I am so excited to start seeing nature come to life again. To add a bit of a kick this month, I chose chili peppers as our POM! Chili peppers are believed to have originated in western South America. They made their way to Mexico where they have been used as a staple in Mexican cuisine for thousands of years. Once it reached Europe, it was shared with countries that had never seen it before like India and Southeast Asia. The Scoville scale is a measure of pepper “hotness”, or how much capsaicin is found in a pepper. Sweet bell peppers are at one end of the spectrum with a score of 0. The highest scale value is 16 billion and is given to a capsaicin-like toxin found in Morocco (read: deadly!). The world’s hottest pepper is the Trinidad Moruga Scorpion pepper with a score of 2 million, even hotter than the ghost pepper! The heat in chili peppers is an evolutionary adaptation to keep mammals from eating them. Birds can’t taste the spicey flavor of peppers. When birds eat peppers, the seeds pass through them which means they can still pollinate and grow!

Chili peppers are a high source of vitamins A and C . Vitamin A is a fat soluble vitamin that helps keep our vision sharp and plays a role in reproductive health. It is also important for our immune system, as is vitamin C. Vitamin C is a water soluble vitamin the aids our immune system and fights antioxidants. The capsaicin in chilis has been found to slightly increase our metabolism. This can help our body’s use fuel more efficiently and burn greater amounts of fat and carbohydrates. Chili peppers are also a naturally good source of folate which is a B-vitamin. It is necessary for cell division and proper formation of DNA

When buying chili peppers, look for glossy and firm skin without any brown or mushy spots. Chili peppers will spice up any dish. It’s commonly used in chili (of course!), as well as Mexican, South American and South Asian cuisines. Dice them up and put them in a stew. Or grind them to make a paste that you can use as a versatile seasoning! For more recipe ideas, check out the recipe section of the Produce of the Month page!